Delighted with this trailer for DEADLY SECRETS

Posted by Gordon Bickerstaff at 19:33 No comments:

How did I get into writing fiction?

For me, it started when I was a student at Heriot-Watt University, which in 1973 was centred in Edinburgh city centre. Along with a couple of classmates, I went to an evening seminar given by Tim Dinsdale, who promised to show evidence of the existence of the Loch Ness Monster. A claim endorsed by the great Sir Peter Scott, who later proposed the scientific name Nessiteras rhombopteryx for Nessie.

At the seminar, Dinsdale did reveal an image (The Rines/Egerton picture) of the fin of the monster. Together with detailed sonar images of Nessie swimming the depts of Loch Ness. The images were impressive, but not conclusive. 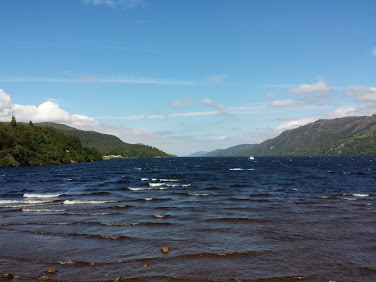 Afterwards, in the post-seminar discussion huddle in a nearby pub, I concluded that it was a load of nonsense. Most Scots believe that the Loch Ness Monster is a myth to lure tourists. But the professional sincerity of Dinsdale and his story set me thinking about the real reason for a group of respected American scientists/engineers led by Dr Robert Rines to deploy high-tech sonar and state-of-the-art strobe camera equipment in Loch Ness. I didn’t believe they were looking for elusive Nessie. So, what were they really looking to find?

Around the same time, Rudolph Hess’s son and lawyers were arguing for his release, so the Rudolph Hess story moved back into the news. In May 1942, Hess was caught flying to the north of Scotland, when he ran out of fuel. During WW2, the British Government could have made great propaganda, but kept his capture secret. After the war, he was held in solitary confinement in Spandau Prison until his death in 1987, aged 93.

He was the only prisoner, guarded in rotation by Britain, France, USA and Soviet Union, while each of them tried to discover details of his mission to Scotland. He died while under American supervision reported as suicide, although his lawyer and family said he was too frail to organise such an event.

For me, the two stories locked together to provide a foundation for an epic fiction story. Americans searching Loch Ness. Rudolph Hess making a perilous journey to the Scottish Highlands and not revealing his mission. The third part of the story increased the intrigue. Americans were the last to speak to Hess before he died.

During my studies, I fleshed out a plot outline. Then life took over, I got married, we had children, moved to Stirling University, then Dundee University for training and experience before settling at Paisley College, which eventually became Paisley University then University of the West of Scotland. All along the way, the plot fermented in my mind, and I developed the story.

During research for the books, I found an article with a plausible explanation for Nessie sightings, but of course, it didn’t receive the same publicity and traction as the ‘monster’ story.

Every author will know that once an idea is locked in your brain, the only way to find peace is to write and write until the story is flushed out of your thoughts. When I retired in 2011, I started full-time on the first book, and found that the story had mushroomed into three books. Deadly Secrets, Everything to Lose, and The Black Fox.

By this time, I envisioned a thriller series that would take inspiration from the books my father read (Ian Fleming) when I was a boy, and the early 1970s TV series, Doomwatch. The Lambeth Group emerged as a Home Office-based covert department tasked to investigate crimes that can’t be prosecuted, or made public, because their exposure would damage the government and the country.

I imagined a department with a policing strategy to protect the country from criminal, unethical, unprincipled scientists, and technologists. They uphold the law, but aren’t constrained by the rules and procedures created for traditional law enforcement.

The lead character is Zoe Tampsin, an ex-army captain, and section leader for the Security Service (MI5). Special forces trained, she served in Bosnia and Afghanistan, and successfully completed undercover security operations at home and various hotspots abroad. Her CO wrote into her record; 'Zoe Tampsin protects her troop like a lioness protecting her cubs, powerful, determined, and completely ruthless.'

Zoe is supported and antagonised by science investigator, Dr Gavin Shawlens. As a natural cover officer, Gavin uses his genuine profession as cover for clandestine work. In return for his expertise on investigations, he receives funding for his research team. A loner, reluctant, sceptical, and lacking confidence in spy business. Gavin is the least experienced member of Zoe’s team.

Posted by Gordon Bickerstaff at 11:45 No comments:

The Hunt for Enigma's Mother

In North Carolina, a home invasion goes horribly wrong, and triggers a series of disastrous knock-on events, beginning with the abduction of a five-year-old girl.

Six years later, one of the kidnappers is identified on a routine facial recognition scan at Glasgow Central train station. Relevant authorities are notified of the find, and they race to be the first to capture the fugitive.

Zoe Tampsin’s Lambeth Group prepare to make an arrest. Unaware that competing forces are desperate to prevent exposure of a criminal cold case that would destroy the long-established alliance between Europe and the USA.

The stakes are high. The consequences are unthinkable. The options are vanishing. 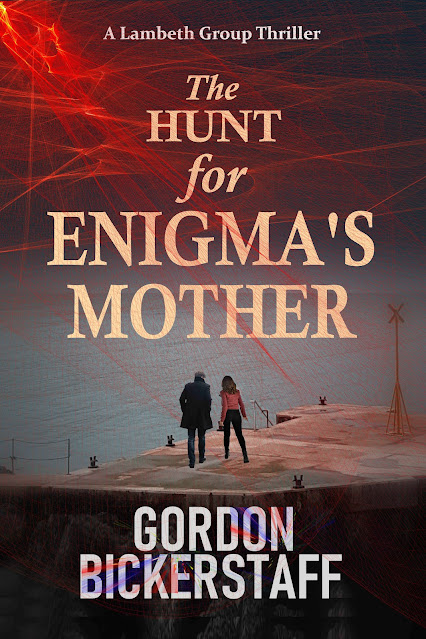 Posted by Gordon Bickerstaff at 21:31 No comments:

In order of Publication

Click on the universal link and choose your book supplier.

Everything to Lose Universal Link

Posted by Gordon Bickerstaff at 09:25 No comments:

Ginger Book Geek
TOP 1000 REVIEWER
5.0 out of 5 stars A superb addition to the series
Reviewed in the United Kingdom on 25 November 2021

I have been a fan of Gordon’s work for a while now. I have by no means caught

up with everything that he has written but I am getting there. I read the synopsis of

‘Extreme Prejudice’, which is the 9th book in the series featuring the Lambeth

Group, and it certainly sounded like the sort of book I have come to expect from

Well it was certainly all that and so much more. I loved reading ‘Extreme Prejudice’

but more about that in a bit.

As is usually the case with one of Gordon’s books, I was drawn into this book

deal as it were. The book developed a hold over me and it was a hold that

I wasn’t willing to break. Once I picked the book up, I found it nigh on impossible

to put the book down for any length of time. My Kindle wasn’t exactly glued to

my hand but it might as well have been because it travelled everywhere with me.

I just didn’t want to miss a single second of the story. I couldn’t turn the pages

of the book quickly enough as I made my way through the story. All too quickly

Lambeth Group. I found ‘Extreme Prejudice’ to be a gripping, thrilling, nail biting,

the edge of my seat throughout.

have had the pleasure of reading. He certainly knows how to grab the reader’s

attention and draw them into what proves to be one hell of a story and then some.

For me, the story hit the ground running and maintained a fast pace throughout.

a dark alley. Reading ‘Extreme Prejudice’ felt like being on one hell of a

turns along the way. Just when you thought that you could take a minute to

reclaim your stomach, catch your breath and gather your thoughts then off

the action would go again. At times I almost had to read through my fingers

as I feared what was going to happen next. For me, ‘Extreme Prejudice’

is the book equivalent of a Hollywood blockbuster movie and far more enjoyable.

In short, I thoroughly enjoyed reading ‘Extreme Prejudice’ and I would recommend

it to other readers. I will certainly be reading more of Gordon’s work in the future.

The score on the Ginger Book Geek board is a very well deserved 5* out of 5*.
Posted by Gordon Bickerstaff at 14:49 No comments:

Join the bookbloggers and book reviewers to read their thoughts on the story and the characters. 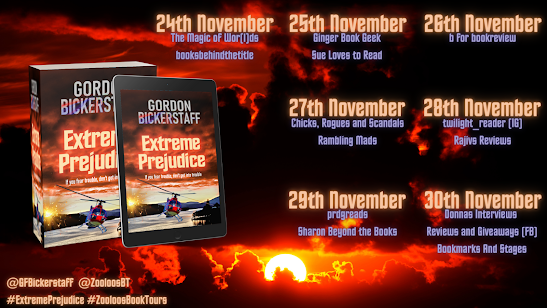 Posted by Gordon Bickerstaff at 14:21 No comments: 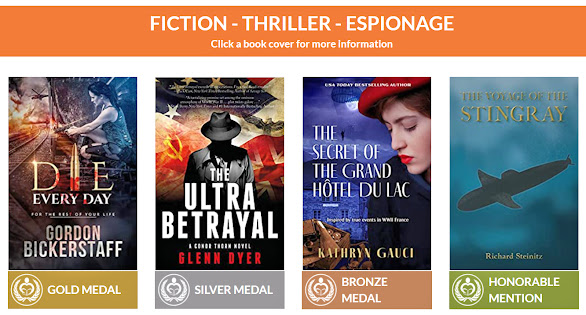 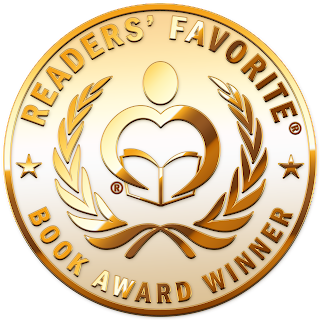 Posted by Gordon Bickerstaff at 11:51 No comments: 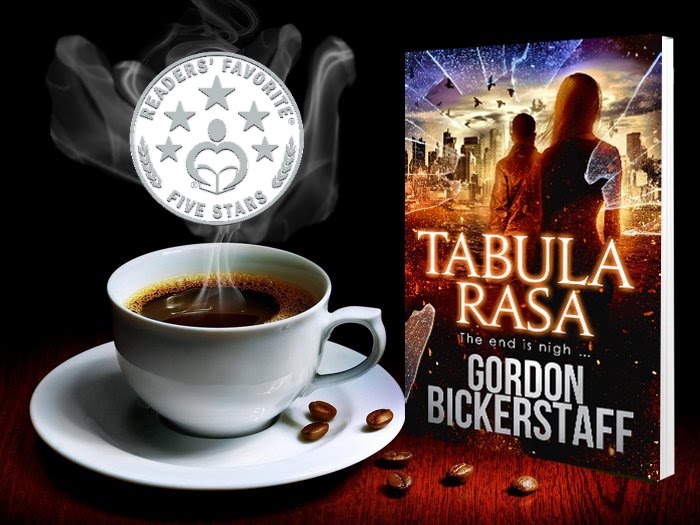 Everything to Lose (A Lambeth Group Thriller) 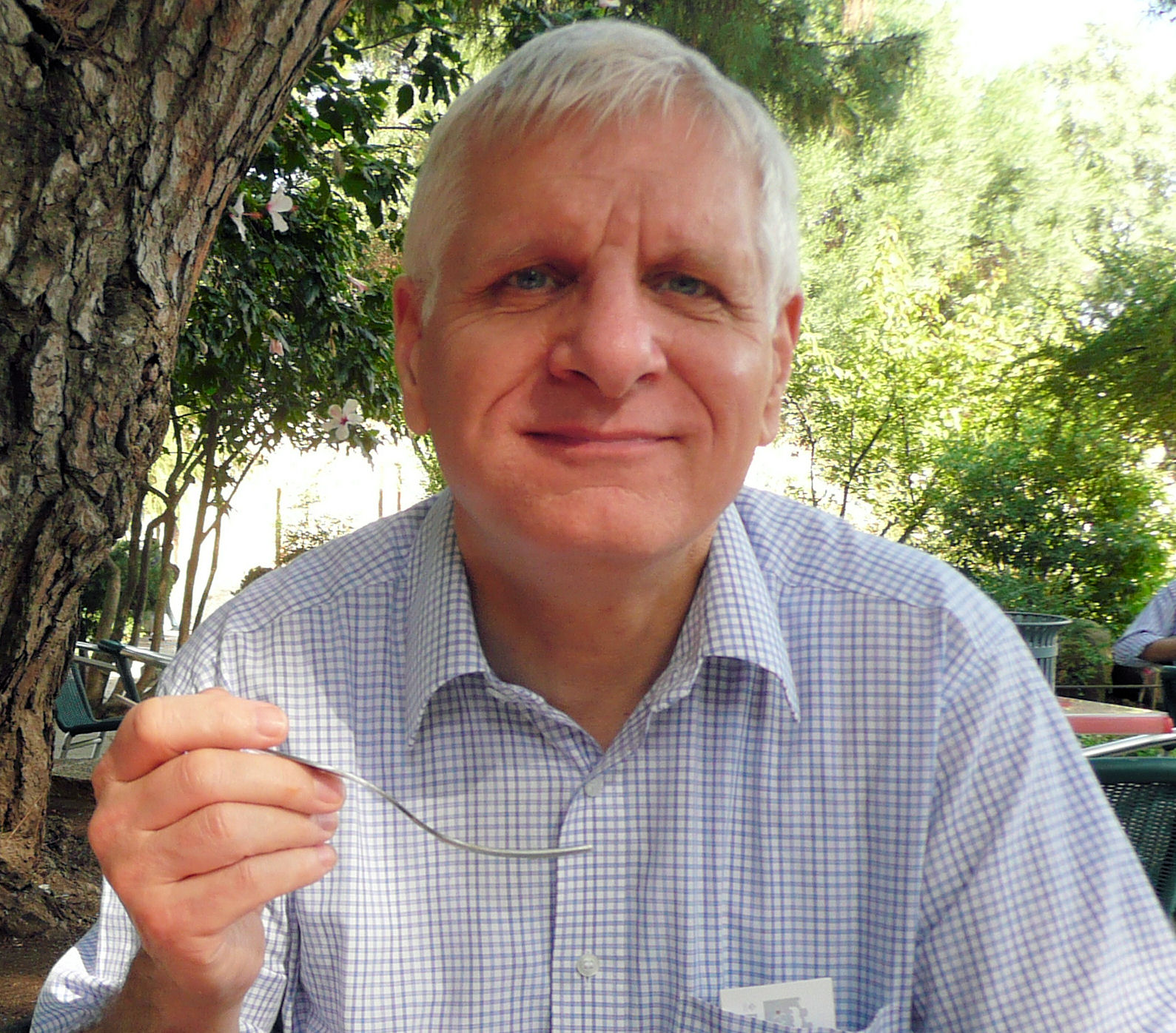